7 tips for portraying mental health in a movie or series

1. Include the perspective of a person with lived experience

In order to ensure a truthful, realistic and authentic portrayal of mental health in movies and series, it is essential to involve persons with lived experience in the process. Who better to portray mental ill health than someone who has experienced it in their own life. Using the autobiography or memoir of someone with lived experience as a basis for a movie or series is a transparent way to tell the story from their perspective. Besides, a person with lived experience or professional background should be on set during the shooting of the movie to safeguard accuracy in depicting mental health problems. This is already the case for physical medical issues and should become the new norm for mental health.

The movie Brain on Fire (2016) is based on Susannah Cahalan’s memoir. It details how her life unravels when she begins to experience a rare neurological disease, after receiving a misdiagnosis of psychosis. Cahalan praises the movie for bringing her story to a wider global audience – as a result she received overwhelmingly positive responses from viewers who were struggling with different health problems themselves. This movie is a positive example of ensuring truthful depiction of mental health in a movie by including the perspective of a person with lived experience.

The series Euphoria (2019) follows the life of 17-year-old Rue as she struggles with substance abuse. It explores teenagers’ first experiences with mental health problems, drugs, identity and trauma. The creator Sam Levinson has been open about his own struggles with addiction and depression as a teenager. He based scenes and events in the series on his own life experiences, delivering a raw and unfiltered insight into the life of a person with lived experience.

2. Do not reduce a character to their psychosocial disability

While a person might be affected by a psychosocial disability, whose combination with barriers in society may disrupt their life, it never defines them. This reality should be reflected in fictional characters on screen.  A movie or series should emphasise their disability is only a part of their multi-faceted character.

The movie La Forêt de mon père (2019) gives viewers a glimpse into the life of a family where the father with mental health problems ends up living in an institution.

“Several members of my team and I have seen this movie and for us, La Forêt de mon père (2019) is portraying mental health in an authenic way, given that the dad in the movie – who experiences mental health problems and has to be hospitalised – isn’t just “reduced” to having this problem. He’s also a loving and caring father whose family has difficulty coping with the sudden onset of his illness. Also, the movie shows very authentically the helpnessness of the other members of the family who have trouble getting access to information about how to help the father (or simply to see him at the hosptial).” – Anne-Sophie De Macq (Communications Manager at the Consultation platform for Mental Health Care in the Brussels-Capital Region)

“It seems very important to us, that such sensitive, true, realistic films like La Forêt de mon père (2019) be widely distributed to the entire population, of all ages in order to promote openness and understanding of this kind of human situation which too often is hidden and the source of totally unjustified shame and guilt.” – Anne Darmstaedter (submitted her recommendation to MHE)

Studies have shown that detailed depiction of suicides in movies or series can have severe consequences for viewers, in particular young people, as they can result in copycat suicides. Communication scientist Markus Schäfer warns of the so-called “Werther effect” which describes the human phenomenon to copy any type of behaviour. Using the controversial series “13 Reasons Why” as an example he argues: “What is dangerous is the detailed depiction of the suicide and the simplification of its causes. Filmmakers should send the message that suicide can be prevented. The complexity of a certain situation should be depicted.” In contrast to that, the  “Papageno effect” describes the positive impact that media can have by presenting alternatives to suicide and uplifting mental health stories.

The Perks of Being a Wallflower (2012) is a coming-of-age movie in which the protagonist Charlie, a 15-year-old high school student grapples with his friend’s suicide and past childhood trauma. The movie documents Charlie’s mental health journey while also beautifully showing the importance of support by family and friends. It is a positive example of portraying sensitive topics such as suicide in a responsible way. According to the National Alliance on Mental Illness (NAMI) the movie “does an exemplary job of showing the highs and lows of growing up with mental ill health”.

4. Steer away from reinforcing certain stereotypes

Since movies and series are a form of entertainment, they often fall into the trap of sensationalising mental ill health and psychosocial disabilities, thereby reinforcing prejudice and misconceptions. A recent example is the movie Joker (2020) by Todd Phillips which falsely links mental ill health to violence. This only leads to further stigmatisation for persons with lived experience. Instead, people working in the movie and TV industry should aim for a sensitive and authentic portrayal based on facts, evidence and lived experience.

The independent movie Infinitely Polar Bear (2015) tells the story of a father with a bipolar disorder diagnosis who raises his two daughters. Director Maya Forbes based the movie on her personal experience of growing up with a father who was diagnosed with bipolar disorder. It has been praised as a meaningful portrayal of the impact mental ill health can have on families by the National Alliance on Mental Illness (NAMI).

In the series The Sopranos (1999-2007) New Jersey mafia boss Tony Soprano is faced with issues in his home and criminal life. As it begins to negatively impact his mental health, he starts seeing a therapist. Psychologists have praised the series for providing a positive role model for men’s mental health as the first major TV series to portray a male protagonist seeking therapy. This can have a far-reaching positive impact: a study by mental health organisation Mind showed that one in three (37%) men felt encouraged to seek mental health support after seeing a character with a mental health problem in a series or movie.

“The Sopranos (1999-2007) is one of the first shows to bring into discussion the subject of mental health and working with a psychotherapist. I’ve watched and re-watched this show in different stages in my life, every time noticing new aspects when it comes to the relationship between Dr. Melfi (the therapist) and Tony Soprano (the mafia head that had the courage to seek help when the anxiety of leading a dangerous life hit him). This is a great show both from the writing and acting perspective but also from the doctor-patient relationship perspective.”  – Eliza Stoica (submitted her recommendation to MHE)

Although 1 in 6 Europeans will experience mental ill health at a given time in their lives, stigma still prevents many from seeking support when they need it. Movies and series can be a powerful tool to break down these barriers and show that mental health problems are more common than you might think. If a movie or series portrays this reality it will resonate with the audience. It has the potential to open public conversations of mental ill health and prompt people to share their personal experiences.

This was the case for Ricky Gervais’s series After Life (2018). It follows the life of Tony who deals with grief and depression in the aftermath of his wife’s death. The release of the series was met with an outpouring of personal testimonies by the audience. Numerous viewers expressed “how the series had made them feel less alone, reminded them of a loved one that had passed away, or acknowledged their feelings of depression and grief”.

The movie It’s Kind Of A Funny Story (2010) tells the story of 16-year-old teenager Craig who starts to live in an institution to seek support for his depression and suicidal ideation. The place is portrayed as a safe space where people who struggle with their mental health can get support while using humour as a relief to cope. “This Hollywood approach to a psychiatric unit may be more comical than any real-life scenario, but it helps normalise the fact that sometimes people need this level of care,” concludes Luna Greenstein from the National Alliance on Mental Illness (NAMI).

In contrast to movies which reinforce a negative image of mental health, filmmakers should consciously make an effort to tell more positive examples of people living with mental health problems. Research continuously shows the positive effect that the “Papageno effect” can have on an audience. Recovery is a journey, not a destination. People do recover from mental health problems and learn to manage their mental health condition in their daily life. This needs to be reflected on screen.

The movie Silver Linings Playbook (2012) takes viewers on Pat’s mental health journey and how the diagnosis of bipolar disorder affects his life. On the one hand, it delivers an honest and accurate portrayal of what it can be like to live with bipolar disorder. On the other hand, it presents a positive mental health story as it shows that people can recover from a mental health crisis and lead meaningful lives with a strong support system: “Perhaps the most truthful aspect of Silver Linings Playbook is that it shows how much Pat is not a solitary sufferer but a man embedded in a web of relationships (romantic and familial) that offer the possibility of recovery and growth,” argues psychology professor Nick Haslam.

Jo Loughran, director of mental health campaign Time to Change praises the movie “because it doesn’t try to pretend to be something that it isn’t. It is a really lovely portrayal of what it might feel like to have a mental health problem. And actually, it really beautifully shows the benefit of support, of having friends around you who will unconditionally be there to support you. And for us at Time to Change, that’s really big. Being there in your mate’s corner [is important] – you don’t have to be an expert, but sometimes just being there will make that big difference.”

Ensuring that communications around the production (e.g. movie, series, episodes, trailer, etc.) are accessible for persons with disabilities and psychosocial disabilities is crucial to avoid discrimination. In addition, appropriate language should be used when communicating about mental health. There is certain terminology filmmakers should avoid in their work as they have largely negative connotations which contribute to common stereotypes, stigma and discrimination. Besides, the cast could be made more inclusive by hiring actors with lived experience or persons with a (psychosocial) disability.

The independent movie My Feral Heart (2016) tells the story of Luke, an independent young man with Down’s syndrome, who develops a deep friendship with his carer while navigating challenges in his life. The movie was praised for casting Steven Brandon, an actor with Down’s syndrome, for the protagonist’s role. “It is an example of the talent persons with (psychosocial) disability show when given the chance,” says Emma Boa, Project Manager at Edinburgh International Film Festival. 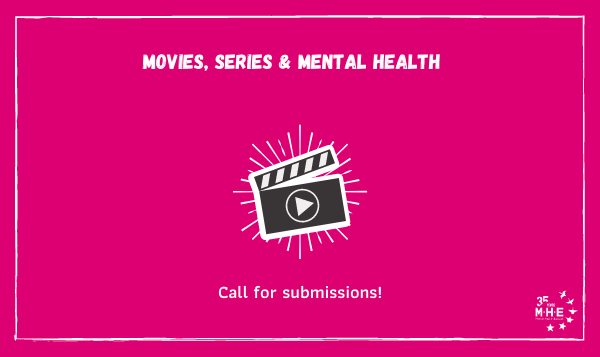 Call for submissions: authentic portrayal of mental health in movies and series 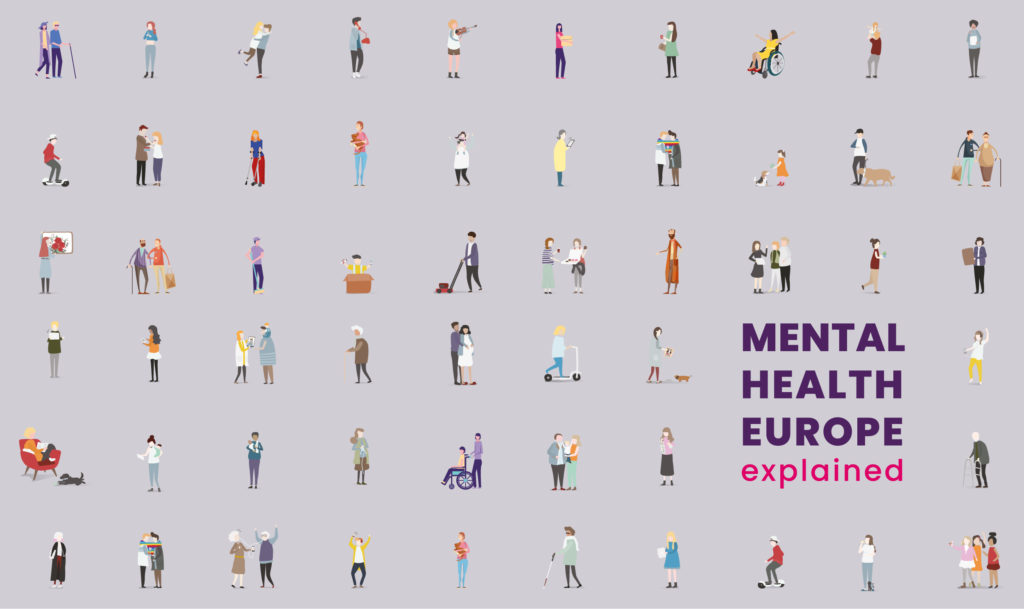 This explainer sheds light on some common terminology misconceptions when it comes to mental health.