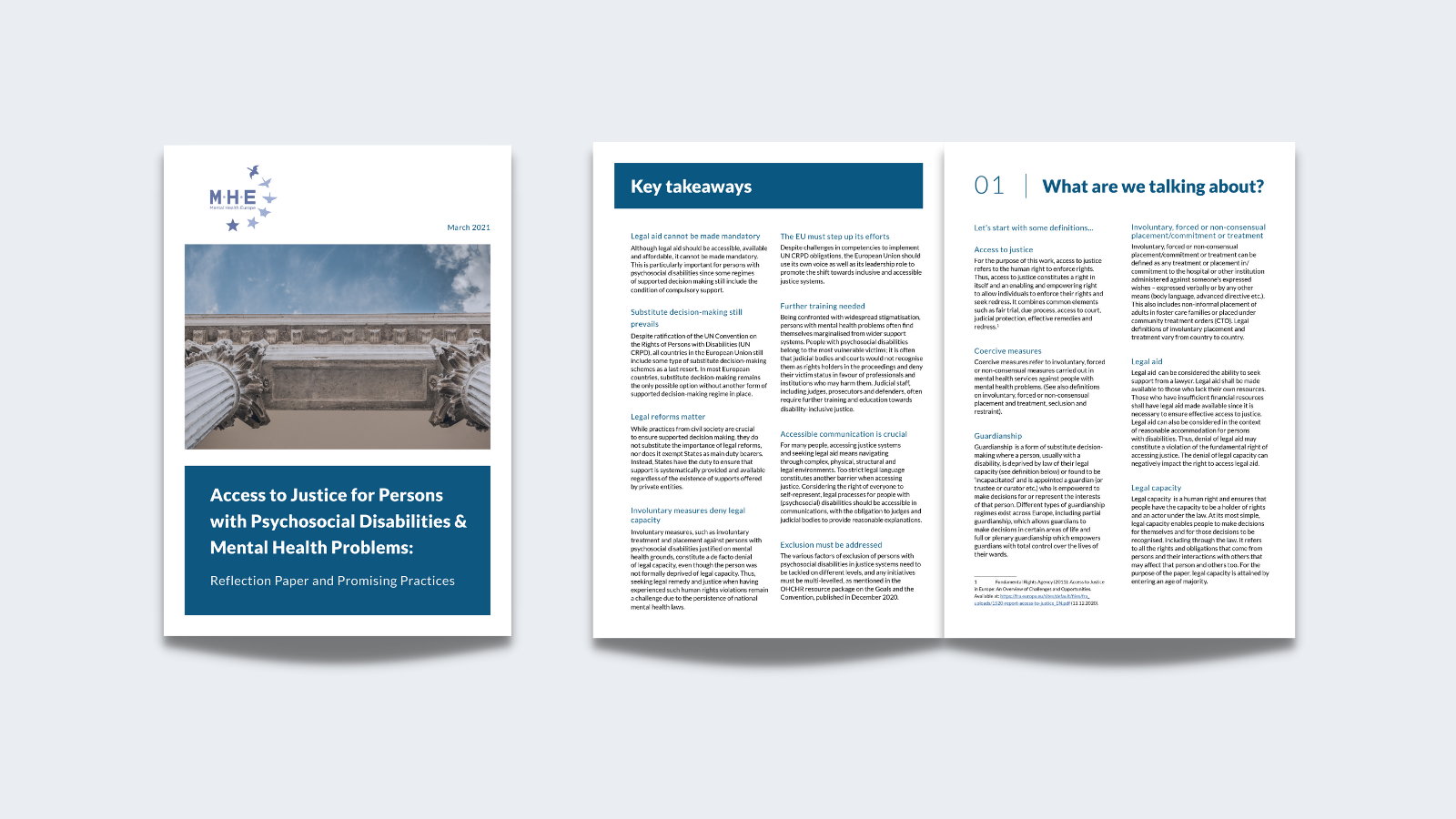 Mental Health Europe (MHE) has updated its reflection paper on access to justice for persons with psychosocial disabilities. The paper includes promising practices on access to justice and legal aid from across Europe. This updated version to the 2020 publication includes also references to the new EU Disability Rights Strategy 2021-2030. The position can be used by stakeholders, particularly the EU institutions, the Member States and civil society organisations, as a working document and baseline for the initial discussions around access to justice for persons with psychosocial disabilities and mental health problems.

Access to justice refers to the human right to enforce rights. Access to justice thus constitutes a right in itself but also an enabling and empowering right to allow individuals to enforce their rights and seek redress. It combines common elements such as fair trial, due process, access to court, judicial protection, effective remedies and redress.

Although legal aid should be accessible, available and affordable, it cannot be made compulsory. This is particularly important for persons with psychosocial disabilities since some regimes of supported decision making still include the condition of compulsory support. Instead, persons with psychosocial disabilities must always be considered as the central holders of rights and must have the right to not choose legal support.

Access to justice is a key element towards the full enjoyment of all human rights for all persons irrespective of disability. For the first time in international human rights law, the UN Convention on the Rights of Persons with Disabilities (UN CRPD) dedicates a specific article towards access to justice (Art. 13 UN CRPD) as a stand-alone right. With the ratification of the UN CRPD, States accept the binding nature of the treaty and commit to national implementation of the UN CRPD, for example, through law reforms, strategic policies and action plans, and awareness-raising initiatives. However, until today States have been struggling to fully implement obligations of the UN CRPD. For persons with psychosocial disabilities, this is particularly the case with questions of autonomy and equality and non-discrimination.

What constitutes a reason to address the court?

Discussing access to justice by persons with psychosocial disabilities also requires understanding that not all experiences of human rights violations meet a national system and laws that comply with international human rights obligations. This is particularly important when remembering national mental health laws that allow for some form of involuntary treatment and/ or placement. Here, coercive measures need to meet certain criteria to be legally justified, for example, the person posing a potential threat to oneself or others usually to be determined by a psychiatric assessment. However, the UN CRPD forbids any form of measures without free and informed consent. In 2020, the UN Special Rapporteur on torture and other cruel, inhuman or degrading treatment of punishment writes

It must be stressed that purportedly benevolent purposes cannot, per se, vindicate coercive or discriminatory measures. For example, practices such as (…) psychiatric intervention based on “medical necessity” of the “best interests” of the patient (…) generally involve highly discriminatory and coercive attempts at controlling or “correcting” the victim’s personality, behaviour or choices and almost always inflict severe pain or suffering. In the view of the Special Rapporteur, therefore, if all other defining elements are given, such practices may well amount to torture.

The role of the EU – stuck within competency issues?

Despite increased involvement by the European Union, for example, through the upcoming launch of the EU Disability Rights Strategy 2021-2030, the primary responsibility for the implementation of the UN CRPD rests with Member States. In fact, the EU does not have full competences in all areas of law: in some cases, the EU can alone pass laws, while in others it has only shared or supporting competences along with its Member States. This is particularly the case for civil and political rights that concern persons with disabilities, such as legal capacity, freedom from coercive measures and access to justice.

However, in ratifying the UN CRPD the EU committed itself to promoting practices compliant with the treaty. Following the Victims’ Rights Directive 2012/29/EU,6 the recent launch of the EU Victims’ Rights Strategy bears the potential to improve the situation of persons with psychosocial disabilities to seek justice, in our view, the EU has not used its competency enough to further change on this important issue. Similar hopes can be made with the European Disability Rights Strategy 2021-2030, to be unveiled in the first quarter of 2021. This is a view which was reinforced by the Concluding Observation of the Committee following its review in 2015 in which it recommended the EU to ‘step up its efforts’ in this areas as well as to ‘take appropriate measures to ensure that all persons with disabilities who have been deprived of their legal capacity can exercise all the rights enshrined in European Union treaties and legislation, such as access to justice, goods and services, including banking, employment and health care, as well as voting and consumer rights’.

With the EU Disability Rights Strategy 2021-2030 as a starting point, we believe that the Commission should use its own voice as well as its leadership role to promote the shift towards inclusive and accessible justice systems. For example, the Commission could support the establishment of cross-national training programmes to educate the judiciary and medical professionals across Europe and financially support joint actions which could help the Member States who are interested in implementing good practices on supported decision-making for people with psychosocial disabilities. The Commission could also encourage the Member States to finance the work being done in this area by national NGOs and particularly service user organisations whose members are directly concerned by these issues.